I wrote the title story for The Porcupine Boy and Other Anthological Oddities, a new anthology of dark fiction that will be published by Crossroad Press on November 12. The book was edited by Christopher M. Jones and features cover art by Natasha Alterici and cover design by Deena Warner along with fiction by Gary McMahon, Priya Sharma, Brian Evenson, Keith Minnion, Elizabeth Massie, Jeffrey Thomas, P. D. Cacek, Paula D. Ashe, and more. 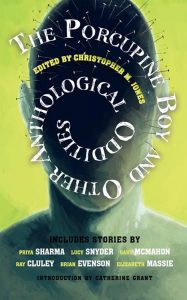 Introduction by Catherine Grant
“Outside” by Gary McMahon
“Feral” by Priya Sharma
“The Coldness of His Eye” by Brian Evenson
“The Porcupine Boy” by Lucy A. Snyder
“300 Down” By Keith Minnion
“The Dark Windmill” by Janet Joyce Holden
“It’s in the Cards” by Elizabeth Massie
“Roadkill” by Meryl Stenhouse
“The Bone Arena” by Jeffrey Thomas
“…and Puppy Dog Tails” by PD Cacek
“The Exclusivity of Ravens” by David Nickle
“Thank You For Not Ignoring Me” by Violet LeVoit
“Jacqueline Laughs Last in the Gaslight” by Paula Ashe
“Adrenaline Junkies” by Ray Cluley

Here’s an excerpt from my story:

Eddie Bellweather got out of his Honda Odyssey with his satchel, locked the door and grinned at the glossy new graphics he’d gotten his buddy Rafael to paint on the van’s side. The logo bore the words “PORCUPINE BOY PATIENT SERVICES” in a blue circle around a cute cartoon porcupine in a Superman-style caped crusader costume with a fists-on-hips pose, a red PB on his chest shield in place of Supe’s stylized “S”. Rafael had promised him that DC couldn’t sue him over his new mascot, and it was exactly what Eddie had envisioned. It was bold and friendly, and Eddie figured it perfectly conveyed the little-guy heroism he strove for when he started his business. People were counting on him. He was needed. And that was something he’d grown up thinking could never happen.

“It is a great day to be alive.” He booped his mascot’s flat black nose with his index finger and then headed up the tree-shaded walkway to Dr. Shanahan’s office.

He hadn’t set foot in this particular office in at least three years, and remembered it as having a cozy, unassuming waiting room with office furniture from the 80s. Only one of his clients was a patient here — old Miss Dorotka — and Dr. Shanahan was fine with renewing her prescriptions without making her take the stressful trek to his exam table. Until now, for whatever reason. Eddie was confident he could get it sorted out.

But when he pushed through the glass doors, instead of the outdated chairs and plastic-framed public health posters he saw fancy new seating, potted plants and expensive-looking oil paintings. And, on one wall, an ostentatiously large crucifix of a sheet-pale Christ nailed to a mahogany cross. It certainly wasn’t there before. The sight of it made Eddie’s stomach tighten. He didn’t have anything against Christianity, not exactly. Not officially. But the cross was the kind of thing his mother would have put up on the living room, not as a reminder of any of the things that Jesus lived and died for, but as a stern notice to all visitors (and particularly Eddie’s few friends) that This Is a Christian House And We Don’t Tolerate That Kind of Thing Here. Her version of Christianity had little to do with goodwill towards humankind or turning the other cheek and everything to do with shame and fronting piety.

Eddie had plenty of Christian clients who weren’t bent the way his mother was; they were good folks of faith. He had no reason to think that the owner of this cross should be less like them and more like his mother. But he also had clients who were Jewish, Muslim, Buddhist, or atheist, and a huge, hard-to-miss cross like this was likely to make them feel a bit unwelcome. So many Christians had done so many terrible things in the name of that crucifix: The Inquisition, the Crusades, the Magdalene Laundries. Dr. Shanahan seemed like the kind of man who’d cracked enough history books to realize that, and who just on basic principle would want to avoid alienating patients for no reason. So what was going on here?

If Eddie was being honest with himself, the cross gave him a twinge of envy. What must it be like to so firmly believe in a higher power, to have faith in the existence of a grand supernatural order that transcended the mundane bullshit that made up so much of everyday human existence? Eddie wanted to believe; he craved belief, at times. But he was fundamentally a man who could only believe in what he could see, taste, or touch. Even the powerful hallucinogens that his friends swore would open his inner eye to the wonders hidden beyond the limitations of fleshly senses left him queasy and agnostic. Eddie figured that the right thing to do was the right thing to do regardless of whether God existed to give you wings for it or not. But some days, he’d have nearly been willing to give his right nut for proof that there was more to the world than met his eye.