My contribution to the book is a tale entitled “My Knowing Glance.” It’s the sequel to my Bram Stoker Award-winning story “Magdala Amygdala” and takes place in the same world at about the same time.

I just finished @LucyASnyder’s My Knowing Glance in the collection Miscreations: Gods, Monstrosities & Other Horrors and WOW. One of the best cosmic horror stories I’ve read in the last few years.

Check out the great illustration that HagCult drew for my story: 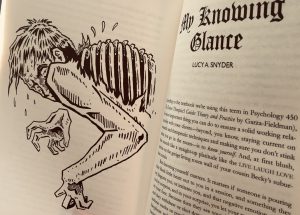